After stepping up to the limelight as headline act for last year’s inaugural “Rooster’s Roadshow”, the indomitable TEAM KILL are back, teaming up with Caveman Events to put together an 8 date tour, reinforcing their reputation as the hardest working metal band in the country!

Hamilton based TEAM KILL is comprised of brothers Rob (Chuck) and Nate (the Butcher) Walker, on guitar and drums respectively. These 2 powerhouse musicians form the brutal core of the band, and helped create the band back in 2011, along with Phil Smathers, whose rumbling bass rhythms combine to provide a solid platform for the incredibly talented Jake Booth to add face melting riffs and solo’s on top of. Jake and frontman Luke Holder (Brick) joined the band in 2013, and brought with them a whole new dynamic to the sound – the impressive vocal styles giving everything a more aggressive edge, and twin guitars enabling them to explore bigger soundscapes.

Collectively described as having ‘more grunt than a tractor pull’, TEAM KILL are definitely the new standard of NZ heavy metal.

Their 2015 tour covers the north island, and see’s the band venture into the South Island for the first time – playing at Rattle n’ Hum Bar in Nelson. This is in response to a fan-driven campaign from some loyal supporters in Nelson, who were determined to create enough interest to entice the band south. Their Facebook page rapidly gained a response, so much so that the band decided it was worth the trip down to play for them.

Having released their debut EP ‘Age of Disease’ in mid-2014, the band have been feverishly working on new material, much of which they will be debuting on the ‘A-Bomb A Nation’ tour. They have been booked back in to the studio to record the follow up EP straight after this tour.

Did we mention, they are the hardest working metal band in the country? 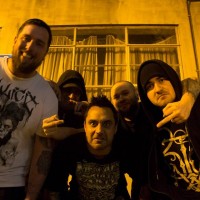 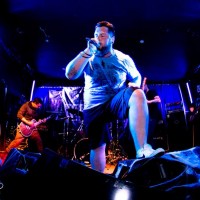 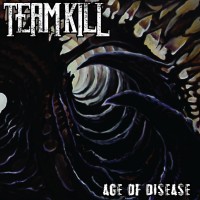 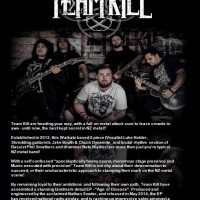