A New Zealand Singer Songwriter who sings the Blues.

Ralph started hollerin’ the Blues and playing Slide Guitar in 1978, after immersing himself in the Mississippi Delta Blues of the early 1900’s. He found his way there via the likes of Led Zep, Janis Joplin, Joe Cocker, Jim Morrison, Jimi Hendrix, Grateful Dead, Allman Brothers and Johnny Winter.

“The first time I sang the Blues was at our Primary School End of Year Concert, I sang the lead on ‘Take this Hammer’ ( they even painted my face black!).

The first time I felt the Blues I was hitch hiking, more walking than rides, but the rhythm of those steps brought out words and phrases.

The first time I connected with the Blues was listening to Johnny Winter playing a National Steel ‘ Broke Down Engine ‘. I shared this with my new flatmate and he gave me the lecture: Blind Willie McTell, from then on it was total immersion, Sonny, Brownie, Leadbelly, Woody Guthrie, Bessie Smith, Fred MacDowell, Robert Johnson of course, but more important to me Son House, Charley Patton, Bukka White and Blind Willie Johnson and then onto Elmore, Fleetwood Mac and Hound Dog Taylor.” Ralph Bennett-Eades

Once On a Blue Moon

Live @ The Bush Lounge (Ralph and the Honey Badgers) 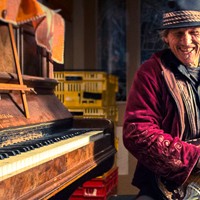 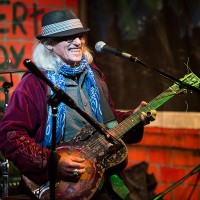