Albi and The Wolves – Remember Your Name:

Congrats to Albi and The Wolves on their debut single and video release – ‘Remember Your Name’. Read more

Albi And The Wolves release their first EP ‘I Will Not Be Broken’, April 2015. Read more

ALIEN WEAPONRY is a three piece metal band whose style has been influenced by old school thrash and hardcore. Read more

Northland thrash metal band Alien Weaponry have added three more successes to their resume for 2015, placing second in the National Finals of both the Smokefree Rockquest and the Smokefree Pacifica Beats competition. They also took out the Youth Performance Trust’s Native Reo Award at Pacifica Beats for their song Ruana Te Whenua (The Trembling Earth). Read more

The youngest metal band in the world? Alien Weaponry, hailing from Northland, are a three piece hardcore thrash metal band who are taking the New Zealand heavy metal scene by storm. Read more

Alien Weaponry set to shake up the Capital:

They’ve opened for Shihad. They’ve toured with Devilskin. They’ve reached the National final of the Battle of the Bands – twice, and got into the Northland finals of the Smokefree Rock Quest four years running, also winning awards for musicianship and lyric writing. None of them are old enough to drive yet, but thrash metal band Alien Weaponry aren’t letting that stop them from bringing their ‘new wave of destruction’ to the lower North Island. Read more

About The All Seeing Hand: 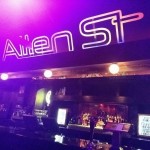