About Ha the Unclear:

From Dunedin but currently based out of Auckland, Ha the Unclear (an anagram for Nuclear Heath, a flatmate who could only cook with a microwave) create off kilter, hook-stuffed, alt pop songs. Since releasing a string of bedroom pop albums in Dunedin under the moniker ‘Brown’ time has been split between Auckland and a basil farm in the Bay of Plenty.

“The band is obviously bonkers, which I love, and suitably kick-ass too. I bet these guys have the best nights out (can I come, please)?” – Fresh On the Net

“The song writing on this album is so strong and unique that many heavy topics are countered with an obscure brand of humour…It’s shit like Bacterium, Look at Your Motor Go that gets me out of bed in the morning” – City and Sound

“the band are unlike any band you’ve heard before. They weave hilarious tales of anxiety and frustration, give intimate emotion to inanimate objects and raise questions about religion and morality within almost a single breath.” – Who the Hell 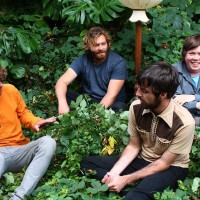